To be honest, up until recently I have never really liked living in Valjevo. I have always compared  it to bigger cities such as Belgrade and Novi Sad and how they have better standard of living and more things to do.

However, as the time passed and I got older and “wiser”, I realized that I am pretty lucky to live here. I was so focused on bad things we have to cope with that I completely forgot the good things, which, by the way, there is plenty of. The city isn’t overcrowded and you don’t have to put up with too much noise. There are a lot of parks where you can relax and do whatever you please. Also, there are tennis courts and a swimming center called “Petnica”. We have one of the least polluted rivers in the whole Serbia, the river Gradac, which is one the most favourite places among younger population to spend time during hot summer days. Lately, a lot of main streets in Valjevo have been renewed so the center of the city looks really nice now.

All in all, I think I am pretty lucky to live in a town like this and I should enjoy every moment I spend here because soon, when I another city for university studies, I won’t be visiting Valjevo that often.

Are we lucky or unlucky to live in a relatively peaceful city?

Although Valjevo is one of bigger cities in Serbia you can still say that it’s a peaceful city.

The best thing about Valjevo is that there are not many people living in the town’s centre, and that is where the beauty of Valjevo lies. Pople like to linger there in cafes after their work.

Tešnjar is another good place to relax owing to its interesting architecture, in which old crafts and small shops are still preserved although the local government prefers to subsidise big supermarket chains. All these old houses, quiet streets and small shops make Valjevo one of most peaceful cities in our country, and we should be happy because of that.

Pople are always complaining that there are not many things to do in Valjevo but I think that in most cases they should blame themselves.

As a person living in Valjevo, I am of course automatically going to say I am not a great fan of the way of life ’round here, but thinking about it for a second makes me reconsider what I have just said.

From a point of view of a person living in a big city with all the hustle and bustle, noise and hectic work, I’d say Valjevo is a real little heaven on Earth. Although it sometimes seems that there are no things to do, and no places to go out to, it is actually not quite like that. People are just too lazy to create things to amuse themselves. Comparing a small peaceful town to a big city makes you realise how much you enjoy walking through the non-crowded streets, sitting on a bench in a quiet park while watching the world slowly drift by, even if you always bump into someone you know anywhere you go, which can sometimes be really annoying.

So, depending on the kind of a person you are and the things that interest you, you are the only one who should choose where to live. I, personally find myself lucky to have spent my childhood here in Valjevo, although I now can’t wait to leave it, but I am also sure that will change and I will want to come back when I’m older. 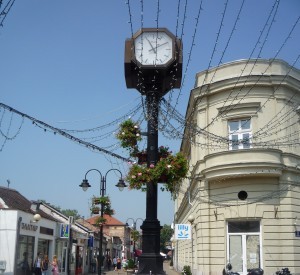 We live in a peaceful city. Some say that’s good, while others say the opposite. Those who like this city are usually older people, who like to have a peaceful morning or time for sleeping, without noise from local pubs and cafes. But, on the other hand, young people who are full of conviviality tend to have some places to go out and have fun.

What can be said about our citizens is that they tend to linger over coffee and gossip, which is not very clever. I think that’s a waste of time, but when I look deeper I believe this may be the one of the reasons which connects the people, so no wonder if you come across neighbourliness almost everywhere. Our people are very hospitable, especially to their neighbours.

Although there are young people, subsidies are not very much popular in our area. In my opinion, that may be the breakpoint for young people to choose to leave Valjevo, so they go to more developed cities in order to seek for a job. What could be interesting  here is the fact that there are some shoemakers and watchmakers who actually still have jobs.

As for the cuisine, Valjevo is known for dishes made from fishes caught in the river Gradac. By the way, Gradac is a favourite picnic area of citizens during hot summer days (this includes not just older people, but also the younger ones).

So, all in all, Valjevo is a city full of diversity. It can make young people feel fulfilled, but I believe it’s more suitable for life of older people. 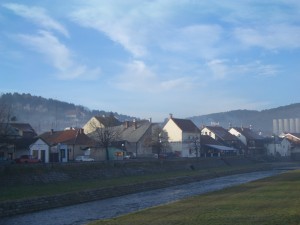 For all my life I have been living in this city. It has always been a small and slow town, but as the time changes so does our time. I remember, when I was a child, there were no hypermarkets, and now they are being opened everywhere. It is the same with big stores which sell branded goods, and I am still not sure whether it is a good or a bad thing. It definitely has some upsides and some downsides. For example, now there is a big choice of low-priced things, but the small shops are being closed because they can not compete with the sales that big shops offer. Also there are not enough people which could buy these things.
As for the people of my time, they have always been convivial and I believe that this will never change. Although they do not have good salaries and maybe they have not paid the rent for their apartment, they will always laugh cheerfully and be ready to help you find yourselves around. Also, people who live in the suburb are known for their neighbourliness and willingness to help. Sometimes Valjevo’s citizens are closer to their neighbours then to their family.
All in all, Valjevo is a small, warm town, with the aspects of both slow and fast life. It is changing but I believe that it will always keep its mentality and hospitality.

Living Alone is a Better Choice than Living with Flatmates

This is Ryan, My Flatmate, by Kyknoord

Advantage of living alone is that you can live without anyone telling you what are you supposed to do.

Also, if you are quiet and introvert it is good for you to have some space and peace.

Disadvantage of living alone is that you have to pay for everything and sometimes  you can feel very lonely.

In our opinion it’s better to live with someone, because we have more opportunities. If we talk about advantages there is a lot of them. We have parents protection and safe place for living. If we talk about friends who live with us it is the same. But if you look from the other side you can see that there is a lot of disadvantages, like that you don’t have right on your opinion and you depend by parents side.

Living with someone can be a very fun and interesting experience, but is it a smart decision to make? Nowadays, more and more people in college campus dorms live together with a roommate, but some of them still prefer to live alone.

We prefer living with someone, because you always have someone to talk to and the rent is cheaper when shared. All in all – it’s more fun.

On the other  hand, people you live with can sometimes disturb you when you’re studying, especially if you have trouble concentrating.

In conclusion, it might be better to live with a friend, as long as you find a suitable person.

Living alone has its goodsides because you have more time for yourself. Nobody can distract yor mind from learning.

But, on the other hand, living with somebody has its good sides, too. For example, if you are busy and you can not do your shopping, pay your bills, or cook your lunch, your roommate can do it for you. Also, if you are living with someone, you will never be bored. But it doesn’t mean that you should spend all of your time socializing. You two should have an agreement about studying time, socializing time and also a list of ‘to do stuff’. Otherwise you will argue easily.